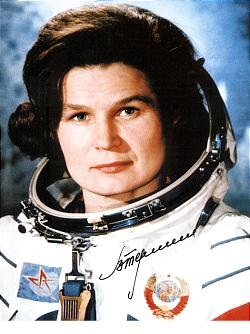 Space holds many secrets for scientists to discover. These discoveries help create a

ending mine for the curious. Technology has been pushed forward with the space age

back in the past century and many countries racing to top one another. It wasn’t less than

60 years ago the first person was put to orbit on earth, and it wasn’t a decade later when

the first woman, Valentina Tereshkova, was selected to go into space.

Valentina Tereshkova was born in the region Yaroslavl of Russia in March 6,

life. Her father died when she was two, and left Valentina and her mother to fend for

them in a country still under turmoil from the world wards. Poverty was nothing new to

anybody. At age eight she started school but only attended for five years when her

mother needed more help at home (Greene). When she left to work for the textile mills

she applied for amateur parachuting club that was being offered. Afterward she applied

for flight technical school and finished her education. During these years up until

feet above earth. During work she and her family were at work when the first man was

put in space when her mother commented the next person should be a woman. Valentina

entered adulthood. The newly developed space program needed to send a woman into

gravity. As many as five-hundred applications were sent to apply for the program for

only five finalists were allowed the opportunity to participate in the study. Valentina had

to meet requirements of those including being under twenty-three, less than five foot

seven inches, and experience in parachuting and expert knowledge of flight (Learning

Haven). On February 1962 Valentina was chosen of five women to participate in the

space program. Due to her Proletarian background and father being a war hero during the

with when dealing with space and flight. All five women underwent intense months of

training and months of learning about space in the women cosmonaut program. Because

to one up the United States the entire program was enshrouded in secrecy. She was not

she would be going to a training camp for an elite skydiving team. It was not until the

cosmonaut program. It took decades before the other women’s identities were released as

Valentina was the only one among them to go and fly. In order to become a cosmonaut she had to join the Air

Force as an Officer. During her 18 months of training hours included sessions on physical training, rocket

On June 1963, Valentina flew to the moon and became the first woman to travel

to the space. Accompanied by another male astronaut she spend roughly seventy hours

on behalf of the cosmonaut program (Greene). She spent three times the total amount

of any astronaut before her and the whole space voyage went smoothly. The point of

men (…). She proved to be able to withstand the physical and emotional stress of space

flight just as any man could before her. After her mission it was not for two decades

before a second woman would be sent up into space.

space. The female cosmonaut program she had undergone training with dis-banned in

1969 ridding the opportunity of the other four women in the original five to go into flight.

It wouldn’t be until 1983 that the US sent its own woman into space (Learning Haven).

asked to grant her one wish from them. Valentina asked for her general father’s death

site be commemorated and built a statue upon, which they followed. Later that year after

in 1963 of that same year. Elena their daughter was born to them the following year and

that have served time in space flight. She would grow up to become a doctor and living

today. After Valentina returned she continued her work with the Communist party and

served as a member of the Supreme Soviet, the USSR’s national parliament. Recently she

has lives in Moscow at the age of seventy-six.

The woman strove to get people involved in the Soviet feminist movement. She

fought for equal treatment for both women and men. A famous statement she is known

for is how a woman’s most important job is to have compassion, be caring and being a

mother. Despite what a woman does with her life, she should strive to be a devoting and