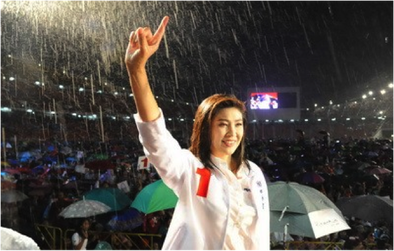 Yingluck Shinawatra was born on June 21, 1967. She is a Thai politician and the leader of the Pheu Thai Party. She is following the same path of her brother, Thaksin Shinawatra, Thailand’s former Prime Minister. She became Thailand’s first female Prime Minister in 2011 and is currently serving as prime minister. She came from a wealthy family, which meant she did not need to work, but she believed that her work would help move the country forward and help prevent poverty. Because of her outstanding effort throughout her life, she became well-known in business and politics.

Thailand, formally known as Siam, is a constitutional monarchy and their King, Bhumibol Adulyadej, Rama IX, is known as Thailand’s longest - reigning monarch in Thai history. Thailand is home to over 67 million people and their capital, as well as their largest city, is known as Bangkok. On June, 1932, a group known as the Khana Ratsadon led a bloodless revolution against their monarch and forced him to grant Siam its first Constitution which ended many years of absolute monarchy. Siam also participated in WW2, having sided with Japan against the Allies, by declaring war on the United States and United Kingdom on January 25th, 1942. After WW2 Siam became an ally of the United States and, like many countries during the cold war, it suffered many years of political instability until about the 1980’s. In Thailand there is a woman by the name of Yingluck Shinawatra, who serves as the country’s first female Prime Minister and member of the Pheu Thai Party. She campaigned for National reconciliation, reduction in corporate income tax, and for the eradication of poverty. She was born into a wealthy family in Chiang Mai on June 21st, 1967, as the youngest of nine children. She started off her career working as an intern at Shinawatra Directories Co. After several years, she became director of operations and procurement. As Yingluck went further into her career she became General Manager of Rainbow Media in 1994 and in 2002 became CEO of Advanced Info Service, Thailand’s most successful mobile phone operator. Way later on in her career, after the founding of the Pheu Thai Party, on May 16th 2011, she was named the top party candidate or prime minister nominee for the Parliamentary Election on July 3rd. She based her main campaign theme, reconciliation, from the 2008 to 2010 political crises following the 2009 to 2010 military crackdowns on the National United Front of Democracy against Dictatorship (UDD) protests. The protests occurred on March 14th, shortly after the Supreme Court ruled former Prime Minister Thaksin Shinawatra, Yingluck’s older brother and founder of Advanced Info Service, guilty of bribery on February 26th. During her campaign Yingluck also proposed a general pardon for all major political incidents since the 2006 military coup that led to her brother’s removal from office, and dissolve of the Thai Rak Thai Party shortly afterwards, but was fiercely opposed by the Government. On August 10th, Yingluck was sworn in as the 28th Prime Minister of Thailand after winning more than half the seats for Pheu Thai, 265, which was a feat only once before pulled by Thaksin’s own Thai Rak Thai Party in 2005. The election was almost a landslide victory and according to Aung San Su Kyi, who also congratulated Yingluck, should be praised as “Free and Fair” ("Yingluck, pheu thai," 2011).

Yingluck was surrounded by a highly political family. Her father was a politician and was a member of parliament for Chiang Mai. Her brother, Thaksin, was a Prime Minister. Therefore, she was very used to political terms, issues, cases, and problems ever since she was a little girl. Yingluck stated, "My father was a politician, and so were my brothers, so I've known about politics since I was a kid"(Kvesic, 2011). As she grew older, she became interested in politics so she decided to major in it. She attended Regina Coeli College, a private women’s school. In 1988, she earned a BA degree from the Faculty of Political Science and Public Administration at Chiang Mai University. After earning her degree, she wished to continue her education so she decided to study abroad in the U.S. Her decision was abnormal for a woman who has a strong and wealthy family background yet desired to obtain more education. The reason why is because her society believes a woman from a wealthy family should spend more of her life in the country and create a family and become a housewife. However, she followed her dream by going to the U.S and planned to graduate from a university there. Therefore, in 1991, she was able to continue her education at Kentucky State University in the U.S. Yingluck graduated with a master’s degree in politics with a specialization in Management Information Systems.

In Thailand, the culture is strict and social norms are hard to be removed, mostly for women. People believe women are inferior to men. It is the country of male dominant figures when it comes to political matters. People also believe if one has done something wrong then someone related to that person will also have the same thing done to them. Yingluck’s brother, Thaksin Shinawatra, used populist economic policies to court the common people of Thailand and transformed them into a political force with him as their leader (Mydans, 2011). He was overthrown in a military coup because some Thai people were not agreeing with his policies and how he was ruling over the country. On July 3, 2011, Yingluck’s party, Pheu Thai, won the election with the significant support from the north and northeastern of Thailand, where people still favor Thaksin’s policies and mainly because they admired corporate success of the Shinawatra family. However, when Yingluck became the first female Prime Minister, some people raised doubt on her because she is a woman and sister of Thaskin. For Southeast Asian culture, it is abnormal for a woman to hold such a high position in the government. As a result, the victory of Yingluck and her party also brought up a division between rural and urban areas. There was a debate over how a woman could possibly lead the country. During her years, the news of her brother dealing and making decisions on her behalf spread all over the Thai media. In other words, people said she is a clone of her brother. She explained by saying, “We are alike in the sense that I have learned from him in business and I understand his vision, how he solves problems and the way he built everything from the beginning” ("Yingluck to be," 2011). Yingluck denied the news and has vowed to work independently (Fuller, 2011). She also responded to reporters by saying, “You might not trust me. Please give me a chance and time. I will prove myself for all of you” (Fuller, 2011). Yingluck was a businesswoman with not much political experience but her passion and desire to improve the economy of her country and prove herself to the people of Thailand was strong. Therefore, she promised to hold and keep her words from the campaign program such as tax relief, price supports, and cash subsidies to the elderly (Mydans, 2011).

Impact on Her Country

Since Yingluck recently became Prime Minister, she has not done many things for her country but she created one goal and a long-term project which is called, “2020 vision for the elimination of poverty” (“อภิสิทธิ์ กับ ยิ่งลักษณ์,”2011). Basically, her goal was to reduce corporate income tax from thirty percent to twenty-three percent and then twenty percent by 2013. She also promised to raise the minimum wage up to three hundred baht (Thai currency) per day and the minimum wage for people who have graduated from universities to fifteen thousand baht per month. Yingluck supported agriculture by improving operating cash-flow to farmers and providing loans up to seventy percent of expected income, which is based on the rice price of fifteen thousand baht per ton. She planned to provide free public Wi-Fi, as well as a tablet PC, to every schoolchild in order to improve the education system for students. In 2011, there were floods only 2 months after having become Prime Minister. The floods were the worst ever in over fifty years in Thailand. It was a big challenge and a test of leadership for her. It started on July 25, 2011 to January 16, 2012, which was about hundred and seventy-five days. On the first few days, Yingluck acknowledged that their ability to turn the floods in a different direction in order to prevent the water from getting into the main city, Bangkok, was failing. Therefore, she said the government would attempt to control the situation. She announced, “Today, we have exhausted every resource we have to slow down the water, be they damming or water-retention areas” (Mydans, 2011). The government tried to protect the city by using dikes and runoff channels but water continued push against the barriers protecting the city. At the same time, some areas of northern and eastern edges have flooded already. As the result, the situation did not getting better so she said, “I have decided to ask Bangkok to open all gates, which could trigger an overflow, in order to drain water into the sea as soon as possible. Floodwaters are coming from every direction, and we cannot control them because it’s a huge amount of water. We will try to warn people” (Mydans, 2011). There was no clear announcement has made on which areas of Bangkok, the capital city, will be flooded or how badly would it be. However, there was an announcement sent a wave of panic through the city. She also had to deal with the governor of Bangkok, who is a member of the opposition Democrat Party, and frightened and angry public. She appealed to reporters and said, “I’m begging for mercy from the media here. Let’s set aside politics. We must work to restore people’s morale” (Mydans, 2011). In mid-August, she established centralized flood monitoring and relief operation ("Yingluck to visit flooded provinces," 2011). She also invested long-term floods prevention project such as construction of drainage canals. According to the World Bank, the economic and other damages were about one thousand four hundred and twenty-five baht. It became the fourth costliest natural disaster in 2011. Since Yingluck is a political novice, she does not know how to handle the situation well but she tried her best. She focused more on how to solve a problem and save the people instead of thinking about cost, damages, and political-related issues.

Every woman in this world has their own voice and each and individual of them are also obtain strong effort and passion. It is true Yingluck involved into politic career with the strong support from the wealthy family and political connection of her relatives or family members. However, she became a prime minister mainly because of she believes businesswoman also could become one of the most successful politicians in the world. She has faced with many negative feedback and responses before and after election. However, she kept pushing herself forward in order prove to be trustworthy and earn trust from her people, Thai civilians. Nowadays, women are changing the world as Yingluck became a part of it.
Click here to view this topic as presentation on Prezi

Reitman, A. (2011, August 6). Just who is yingluck shinawatra?. Retrieved from http://www.womensviewsonnews.org/2011/08/just-who-is-yingluck-shinawatra/