Books, especially novels, play an important part in the world. Novels, like those in the Harry Potter series, are read by many across the globe and are widely regarded as a pinnacle of today’s culture. But where did this form of literature originate? Who wrote the first novel? Many believe that Murasaki Shikibu, a lady of the court in early 11th century Japan, penned the first novel. This was a feat in and of itself, as not only did she write what is believed to be the first novel, but she did it in a culture where women were not allowed to learn the script that men wrote in during this time. Women were not given the same education men were, as they were expected to be beautiful, not well educated. Murasaki transcended this cultural belief, however, by writing her novel, The Tale of Genji.

The woman we know as Murasaki Shikibu was born around 978 in what is known as the Heian period of Japan. This was not her real name, however. Instead, it was a nickname given to her by her friends in the court; Shikibu coming from the position her father held and Murasaki coming from the popular character in her novel (Tyler, 2006). Her father, Fujiwara no Tametoki, held a great amount of power in 10th and 11th century japan, serving as governor in the provinces of Harima, Echizen, and Echigo. As a scholar himself, he encouraged her in her studies, though he was a bit reluctant at first, as she was not only a woman, but took to her studies much easier than his son did. In 998, Murasaki was married to Fujiwara no Nabutaka and gave birth to a daughter (Inge, 1990). She was widowed within two years, however. A few years after this, she was called to serve Empress Akiko due to her great ability in writing, for whom, as well as the other ladies of the court, she wrote The Tale of Genji. 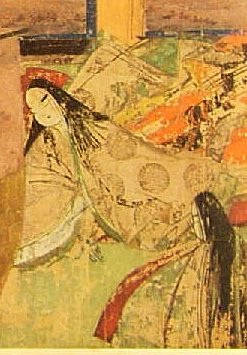 During the Heian period of Japan, as was true for much of the history of Japan, boys and girls were educated differently. Boys were taught their Chinese characters as well as other subjects, while girls were taught a simpler, easier language based on the sounds that the characters made, and skipped over the subjects their brothers learned. This women’s language would be the basis for the Japanese language. There were many cases, though, where Japanese women could not read at all. Poems, usually written by men, were written in Chinese, as the women’s language, like the women during this time, was looked down upon. Women who tried to learn the Chinese language were also looked down on, as it was not seen as a woman’s place to learn the language of scholars and men. It was seen to be unladylike (Tyler, 2006). Women were at a much lower status than men were during this period. Men held a great deal of power, partially due to religions in the area that had a patriarchal basis. This is how it had always been in the country, and it would not be changed for a long time. Women were expected to be beautiful, but not always to be intelligent, and they were not expected to be educated or be heavily involved in politics. In one instance, Murasaki wrote about how it was not her place to comment on the emperor’s death (Inge, 1990). Murasaki’s education was a special case. She sat in on her brother’s lessons, and quickly picked up the Chinese language. While her father was disappointed, saying “If only you were a boy, how happy I should be,” he allowed her to study with him, learning not only Chinese, but also various subjects such as music, science, and politics (Women in World History). Murasaki tended to hide her ability to write in Chinese, however. She was clever and intelligent, but during this time, it was not socially acceptable for a woman to be writing in Chinese. Her cleverness and intelligence also made it hard for her to make friends, as she tended to drive them off with her personality. She did find a friend in the ladies of the court, though, and even the empress considered her a friend, learning Chinese from her in secret (Maki, 1940).

Murasaki wrote her novel, the first of its kind, while she was serving in the court. This kind of literature was unheard of before this time. Before the novel, literature was restricted to poems and books like diaries. Murasaki was the first to combine such well written, three dimensional characters, scenes, and plots, doing so seamlessly. This was due to her amazing editing abilities, another aspect of literature that was rarely practiced with such great details.  Many of Genji’s chapters were written out of order, being rewritten and combined later on. Genji’s chapters were believed to be realized in a serialized style, with one chapter coming out at a time, similar to multi-part stories in magazines. This was another creative process that is believed to have its roots in Murasaki’s writing. She even helped to create the genre of romance, a very important theme in Genji, as the feelings, experiences, and fates of women sometimes seemed to be the real story underneath the actual story of Prince Genji . Her literary genius caused scholars to compare Murasaki to many other famous writers and poets, such as Shakespeare or Proust (Tyler, 2006).
Murasaki also included other risky literary devices, which proved to be successful. For example, she kills off Genji halfway through the book. It was believed that no one would want to read a book where the main character dies in the middle, but the ladies of the court eagerly awaited the next chapters. She also was known to break the forth wall, adding comments about not wanting to provide a list of party guests, as it would be a great bore, and asking her readers to forgive her if she left something out (Inge, 1990).
Murasaki’s great intelligence and wit also made many appearances throughout her novel. Her immense knowledge of the arts, including music and science, showed up multiple times in her writing, reflecting what her father had taught her as a child alongside her older brother (Maki, 1940). She also showed a great ability in describing landscapes, due to traveling with her father while he was visiting other provinces, as was his political duty. While she was unable to make many good friends in her youth, she was able to gain experiences that would influence her future writing (Tyler, 2006). Murasaki also wrote about the suffering of women during the Heian period. She tended to write her male characters as having the worst, most misogynistic personalities. While this might seem to be an exaggeration, women really were treated as second class citizens during this time, and Murasaki was known to use sarcasm to draw attention to their chauvinistic tendencies (Inge, 1990).

IMPACT ON THE WORLD

For the longest time, many scholars believed that the novel had its roots in the 17th century and that it came about fully in the 19th century, but the basis of the novel goes much farther back. Of course, this could be due to the fact an English translation of Murasaki’ s novel was not available until the early 20th century (Inge, 1990). Genji influenced so much of the Japanese literature,it with many other authors writing about court life and romance in novel form had followed it.

Before Genji, fiction had been looked down on,it would soon explode as a popular genre in Japan and across the this brilliant work of Lady Murasaki would even inspire artists across the history of Japan, with everything from beautiful scrolls to paper screens to even manga being drawn based on Genji.

As it can be seen, Murasaki’s work played a fundamental role in the evolution of modern literature. She created her own genre and writing style and employed many literary elements for the first time. Murasaki changed the face of literature forever. Today, there are novels everywhere. Ask any young adult what their favorite book is, and they are very likely to mention a novel. While some scholars try to downplay her contributions, questioning her authorship or implying the modern novel could have surfaced without her influence, still helped to bring about a revolution in literature in Japan, which subsequently changed literature across the world.