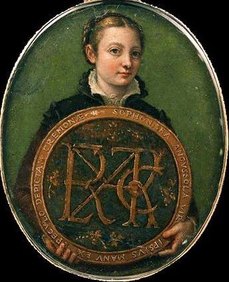 Sofonisba Anguissola was one of the few of the women artists of the Renaissance.  Her gender gave her many challenges throughout her life, but with the support of her family and an amazing talent with the paintbrush, she earned the respect from some of the world’s most famous artists, such as Michelangelo Buonarotti and Giorgio Vasari, and great political figures like King Philip II and Pope Pius IV.  Her portraits and style set her apart from other artists of her time.  When painting portraits she usually “preferred a straightforward naturalism to Mannerist display” (Davies et al., 2011, p. 163).


Women during Anguissola’s lifetime were seen as life forms meant to only bear and rear children; rarely to leave the domestic setting of home.  Economically, “women remained active only in carding and spinning wool”; it is believed women had “more economic contribution during the Middle Ages rather than the Renaissance,” due to capitalism making goods more efficient; they were also paid less for jobs, as a result, many women became or remained unemployed (Think, 2010).  Art was a man’s job; women were seen as incapable of creating masterpieces and were only used for models in the art community.  Artists made their fame through art guilds where women were not permitted (Drahman).  Though women were seen as domestic creatures, they were rarely depicted in paintings with a domestic background; they were usually painted as religious figures, high political and wealthy figures, or in sexual suggestive poses.  The painted woman was a depiction of what the men wanted the Renaissance woman to be (Drahman).

Sofonisba’s father, Amilcare Anguissola, did not believe in the same ways as a traditional Renaissance man.  He did whatever he could to assist his children in following their hearts and achieve their dreams despite their genders.  There is some controversy of how many children were in Sofonisba’s family; they can range from five to seven children, but one thing is for certain, most of her siblings were sisters.  Five of Amilcare’s daughters were painters, but two of her sisters ceased painting when they married, one had to quit painting because she became a nun, and fourth, whom was also the most talented of the five, died young, leaving Sofonisba the last remaining artist in the family (“Newworldencyclopedia.org,” 6/10).

The financial support and family reputation assisted Sofonisba greatly, but she still had to overcome the obstacles of her gender to make it through the fine arts career.  Her father sent “her with her sister Elena [whom would later become a nun] to study with Bernardino Campi, a respected portrait and religious painter of the Lombard school who hailed from Sofonisba's home town of Cremon” at the age of fourteen (“Newworldencyclopedia.org,” 6/10).  The school was one of the few that would accept women into the arts program, mostly because of the family’s wealth and nobility.  Sofonisba had painted her first artistry teacher; the painting depicts her mentor, Bernardino Campi, painting her portrait.  Her portrait in the picture plane is larger than Campi’s figure, some scholars believe this indicates she believed she would rise and become more skilled than he would or his small size could represent his lack of confidence (“Newworldencyclopedia.org,” 6/10).

Around the year 1554, Anguissola left for Rome, where she met the great Michelangelo Buonarotti through a friend.  Michelangelo was elderly at the time she met him; since art was a male dominated occupation, the famous artist would have refused to meet Anguissola had she not been exceptionally talented (Fulmer, 2005, p.2).  Michelangelo agreed to informally teach Anguissola for and estimated time of two years by giving her some of his sketches and then she would redraw them in her own style followed by a critique of each finished project (“Newworldencyclopedia.org,” 6/10).

The year 1559, Anguissola was invited to the royal court of Spain by King Philip II to “serve as the lady-in-waiting and portrait painter to Elisabeth of Valois” (Jacobs, 1994, p. 76).  Giorgio Vasari, a painter, poet, historian, and architect, visited the Anguissola family home to praise the young artist, but Sofonisba had departed for Spain before his arrival.  Vasari toured the Anguissola home, admiring Sofonisba’s portraits; one that stuck out the most to him was The Chess Game, a painting depicting her sisters playing chess.  After seeing the painting “Vasari wrote, ‘The portraits were so life like that the figures seemed to breathe, and I was only surprised at their silence…The Lady, with such great excellence, was able to do more than anyone in are’” (Fulmer, 2005, p.4).  In Spain, Anguissola painted portraits of the Spanish queen, who had changed her name form Elisabeth of Valois, to Queen Isobel; Anguissola’s work of the royal family attracted the attention of Pope Pius IV.  The Pope commissioned the artist and bought her portraits, some portraits were of Queen Isobel (Tess Cole-Adams, 2007, p2).

Sofonisba married twice, once at the age of 38 to Don Francisco de Moncada, who died eight years after their marriage, and to Orazio Lomellino, a ship captain, at the age of 47.  Orazio supported Sofonisba’s painting and they lived a comfortable, long, and happy marriage.  Sofonisba had many apprentices that tried to copy and adopt her style with their own.  In her later years, she painted religious topics; unfortunately, most of her religious paintings have been lost (“Newworldencyclopedia.org,” 6/10).  She never painted nude figures; though she had achieved great success in becoming one of the few female artists of her time, it was still voodoo for women to draw nude figures.  Anguissola died at the age of 93.  She was one of the first internationally famous and respected female artists and opened the doorway to art
References: