Men have dominated and controlled the world throughout history
for the most part but there have been various women throughout history as well
to take charge and rule an empire. Cleopatra is a well a known woman to fight to
become a queen and rule the Roman Empire for quite some time. She overcame
various obstacles and manages to obtain support and help by the powerful men
that surrounded her empire in order to overthrow her brother and take her
rightful place to help her people.

Cleopatra VII Philopator was born around 69 BC in Alexandria, Egypt and was a part of a Greek family that happened to be rule Egypt. When her father, Prolemy XII in 51 BC, he left both her and her brother, Prolemy XIII as
co-regents. Her mother seems to remain a mystery, some believe that her mother could potentially be her father’s sister, Cleopatra V Tryphanea.  At
the age of eighteen, Cleopatra married her younger brother, with the age of 12, Prolmey XIII because of the Egyptian law, which called for any female ruler to have a consort who was either a brother or son in order to rule Egypt together. The age difference seemed to be to Cleopatra’s advantage and she ruled alone for approximately three years. She was then exiled for ignoring her younger brother’s right to rule along her side, leaving Prolemy VIII in charge of the entire Egyptian Empire. 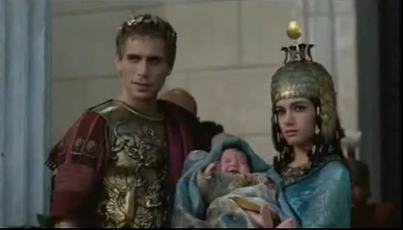 In 48 BC, the Roman Empire and Pompey began a civil war and when
Pompey fled to Alexandria, he was murdered by the order Prolemy VIII.
Afterwards, Julius Caesar went to Egypt where he met Cleopatra and was
overwhelmed by her beauty and fell in love with her. Cleopatra knew that Julius
Caesar had a strong military force and took advantage of the fact that He loved
her, so she eventually convinced him to help her overthrow her brother. After
overthrowing Prolemy VIII and killing him, she took her rightful place on the  throne. Shortly after, Cleopatra gave birth to the son of Julius Caesar,
Caesarion, to whom he never claimed as his own out in public.

As a Queen, Cleopatra did what she could to learn the Egyptian language since she was taught and was raised to speak Greek. When she finally  learned the Egyptian language, she chose to only speak that language. During her rule, Cleopatra maintained peace and stability and prosperity to the Egyptian empire when they were bankrupt because of the recent civil war. When Julius Caesar was assassinated in 44 BC, a rival emerged between Marc Anthony and Octavian, the adopted son of Julius Caesar.

Could it be love? 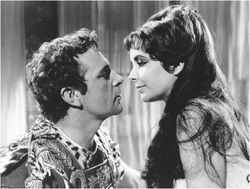 Although Marc Anthony was married to Octavia, Octavian’s sister,
he pursued a relationship with Cleopatra. Cleopatra and Marc Anthony have a total of three children, conceived within their relationship. This is a direct insult to Octavian and his family and so he sought to convince the romans that they should be very worried at the fact that Marc Anthony would hand over the
empire to Cleopatra VII, the Queen of the Egyptian Empire because she had him under a spell. Octavian continued to instigate a war until another Civil war broke out.


In 31 BC, Cleopatra and Marc Anthony joined forces in an attempt to stop and overthrow Octavian. Even with their joined forces, they were no match and were defeated by the Roman military. The two fled to Egypt as a final resort to escape but Octavian did not want to let them have their way. They were eventually caught in
30 BC and they would rather commit suicide than be murdered. The plan was Marc Anthony would commit suicide by stabbing himself and Cleopatra was to commit suicide by being bitten by an Egyptian snake. Cleopatra was the age of thirty nine when she took her own life on the twelfth of August in 30 BC. However,
Octavian was not fully satisfied with only the deaths of Cleopatra and Marc Anthony and had Caesarion strangled to death.  Cleopatra was the last pharaohs that ended the Cleopatra Dynasty.

Although Cleopatra’s life ended very tragically I believe that she was able to manipulated and dominate a small portion of the “man’s” world and rule it in the most efficient way. She managed to have her face on a coin
when that wasn’t very a common tradition for a queen. Her beauty and her way of carrying herself attracted people to her; usually men whom obtain a seriously ridiculous amount of power in order to receive any kind of
benefit.

Marc Anthony once wrote a segment down about what impresses and what mainly attracts him about Cleopatra.  "For (as they say) it was not because her [Cleopatra's] beauty in itself was so striking that it stunned the onlooker, but the inescapable impression produced by daily contact with her: the attractiveness in the persuasiveness of her talk, and the character that surrounded her conversation was stimulating. It was a pleasure to hear the sound of her voice, and she turned her tongue like a many-stringed instrument expertly to whatever language she chose...." she knew what she was capable of and how she would men to allow her to do something.

The Woman with Dominance

Cleopatra struggled through so much and for the most part it was all so chaotic but from the beginning her mind was set to take her rightful place on the throne as queen. Overall she fought for her country and when she ruled her empire and country was at its greatest peaks after her father’s death. Her inner strength to overcome all the chaos and get as far through her goals as she did makes you realize that just as men, women are powerful, the only main difference is how we approach a situation and how we make use of our power.