This quote is so powerful.  It presents a challenge for one to live based on who they are, and not who
society tells them to be.  It challenges one to believe in everything that they are doing with their life.  It is a
challenge most people cannot allow themselves to meet.

In a world full of peer pressures, governments that oppress their people, and an emphasis on "acceptable”Religious beliefs and practices, Joan of Arc was in a position that made it especially difficult to meet such a challenge. Despite all of these obstacles, she was able to stay true to herself until the day
she died.  Because of her beliefs and application of this philosophy, she was able to lead France to many victories, and eventually after her death, became a martyr to the French people.  In order to understand exactly how Joan of Arc was able to make such an impact on her country, it is important to look at her entire
story...

Background and the Hundred years war

The war had been in England’s favor up until this point, and just three years after the birth of this "Jeanne d’Arc", the start of a new English invasion began in 1415 (Williamson, 1999).  During the 75 plus
years of the war, France had been suffering major losses, and was in a state of division.  Specifically, the
region Joan of Arc was born into had suffered seriously as result of the conflict between France and England. (Pettinger, ND) It wasn’t until Joan of Arc (the English translation of Jeanne d’Arc) came into the picture that the war took a turn in France’s favor. All of these aspects are important to be familiar with, because they
make is easier to understand the type of life a peasant, such as Joan of Arc would have been born into.  This life would have been socially chaotic, financially unstable even more so than usual, and morally questionable.

Because Joan of Arc, or Jehanette, as she was called growing up, was brought into the world in these conditions, some might have presumed that she would lead a life like most other peasants, which is why
to many, it is surprising that she is even well known today (Cohen, 2012).  However, from the time she was a young child, she already stood out from many children her age.  Jehanette was spiritually outspoken before she even became a teenager.  At the age of just twelve, she started to have “mystical visions”  (Pettinger, ND).  She said the visions allowed her to feel the voice of God.  The voice, she said, was commanding her to renew
the French nation. Many psychologists and other doctors of today would like to suggest that she may have
had disorders such as epilepsy or schizophrenia, because she reported that bright lights accompanied
many of her visions (Cohen, 2012).  Jehanette said that the first time she heard God’s voice, she was “very much frightened” (Pettinger, ND).  The visions continued, which caused her to continue to
practice, and take very seriously, her religion.  None of the visions really called for her to do
any more than attend church and spread her beliefs until she was around the age of sixteen.

So... where did these visions lead? 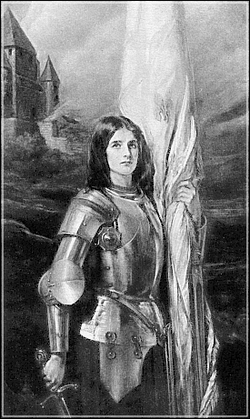 By the year 1428, the visions started urging young Jehanette to request the audience of Charles de Ponthieu, who was the current Dauphin of France, despite the fact that he was very weak and relatively inefficient (Pettinger, n.d.).  In order to get to the  Dauphin, however, she had to go through Captain Robert de Baudricourt, who, on her first visit, told her to go home.  This visit wouldn’t be her last, however.  After almost a year, when she was
seventeen, Jehanette went to the captain once again, and this time, he gave her a chance to explain herself.  When
asked who her “lord” was, she said “God”,and this time, he promised to arrange for her to be escorted to the Royal Court at Chinon.  On the journey, which lasted a total of eleven days, she opted to wear man’s clothing, since it was through the enemy territory (Beck, 2010).

When Joan was finally able to present herself to Dauphin Charles, she touched him with her words and “overwhelmed [him] with her passion and conviction” (Williamson, 2010).   After hearing her testimony, he sent her to the city of Poitiiers to be
examined.  Finally, after three days of examination it was determined that “nothing has been found in her, only good, humility, chastity, piety, propriety, [and] simplicity” (Williamson, 2010).  Once she was approved, Charles allowed her to go with an army to Orleans.
Once they arrived, Joan led the French to their victory at Orleans, and within a year, to several other victories, including Patay and Troyes.  Pettinger (ND) writes that “Many other towns were also liberated from English control, and it allowed a triumphal entry into Dauphin for the coronation of King Charles VII on [July 17, 1429]”.  In essence, she was able to completely reverse the standing of France within the year that she was on the warfront, although she never actually fought and served as more of an inspirational mascot (Cohen, 2012).


Because of these accomplishments, Joan of Arc and her family were granted noble status.  In
addition to being recognized by the government for turning the war completely around, she was also well liked amongst the soldiers, as they saw her as to be a kind of “mythical leader” (Pettinger, ND). All of this shows how amazing of a woman Joan of Arc, or Jehanette d’Arc as she was known to be in her time, was.  However, her story doesn’t end here.  Almost a year after her victories, she was captured by the English, and the English, along with members of the French clergy, decided to put her on trial for witchcraft (Pettinger, ND).  Although Cohen (2012) states that by the time they were through with clearing certain charges, it was not witchcraft
that was her ultimate demise, but other charges the English and their French supporters came up with.  In her
trial, which is sometimes considered to be one that was primarily for show, since the Frenchman in charge of the clergy was a large English supporter who “hated Joan of Arc for her miraculous revival of French national pride,” she was supposedly tortured in attempts to get her to confess.  Because she was illiterate, some argue that her confession was unintended, and that she simply put her name down, without knowing she was
signing it to confess to her“crimes”.  Roughly a week after her supposed confession, she recanted, which
eventually resulted in her execution.